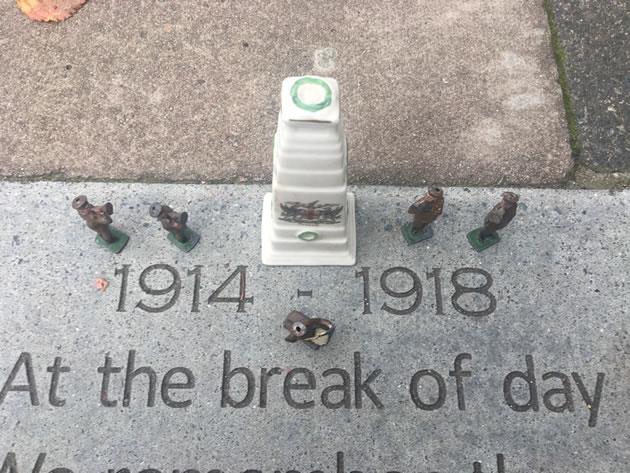 Last year Festing Road in West Putney laid a stone to commemorate the four from the street who died in the 1914-18 war. This year to keep the memory alive a model Cenotaph and lead soldiers from the period have been placed on the engraved paving stone. The buglers are playing Last Post.
A reminder that this kind of annual remembrance, at a local and national level is part of everyone’s past and present . This street memorial is particularly poignant to the present inhabitants who live in these “homes for heroes.”
Gillian Burgess lives at no 11 one time home of John Gobbey a lance corporal in the Royal Fusiliers who died aged 28 in November 1915. She says, ”This memorial reminds me of the sacrifice my grandparents made in the Ist and my parents in the 2nd World Wars. My mum and dad were in the RAF and on one of the last boats out of Singapore.”
David Nicholson lives at no 3 where Albert Biscoe a 39-year-old bus conductor lived before he fell in 1917. He says, “ “Both my father in law and my father served in the second world war and it’s a good thing we have a chance to remember those from our own street that fought for our freedom in the Great War as well.
Anna Crompton lives at number 73 where house painter George Down once lived. He died in 1917 aged 33. His battlefield cross is in All Saints, Putney Common church. She says, ”Every time we pass this slab it makes you think of the sacrifices that ordinary men made for us. So many were killed in the 2 wars - and there really should be an engraving like this on every street to remind all of us of those who genuinely stood at the end of the world. Let’s get this started in Wandsworth! “

Street organiser Hugh Thompson says, “ Never forgetting , from no 43, Sergeant John Copping of the Service Corps who died of wounds in 1919 and is buried in Calais. For them all, the poet Wilfred Owen beautifully wrote in an Anthem for Doomed Youth, ‘What passing-bells for those who die as cattle?’ Over 100 years later, for the Festing Four, we are those passing bells.”