Controversial plans by the All England Lawn Tennis Club (AELTC) to build 38 new tennis courts and seven new buildings on Wimbledon Park have been revised again.
The AELTC has submitted 12 new documents detailing amendments to their plans, which include an 8,000 capacity show court which would span 67 hectares across the boroughs of Merton and Wandsworth.
More than 1,200 people had objected to the original planning application, with many criticising the overdevelopment of 'heritage open space' and the surviving views around it, as well as the current open grassland.
There was also local anger over plans to close Church Road in Wimbledon Village during, and in advance of, the Championships. The road would be needed to provide a secure route from the former Wimbledon Park golf course to the existing AELTC grounds.
The new documents published by Wandsworth Council, but not yet by Merton Council, state that Church Road would only be closed for three weeks each year.
A report prepared for the AELTC by engineering consultants Buro Happold analyses a number of alternatives to closing Church Road. It considers tunnels under Church Road as well as bridges and underpass options (one is pictured above).
But the new 81-page Transport Addendum report concludes that a temporary closure of Church Road is the only realistic option. It states: "The alternative options assessment presented...shows that there are no reasonable alternatives, as the options for permanent interventions required to avoid the closure of Church Road would have substantial and irreversible impacts on the heritage significance of the landscape, including veteran trees.
"The infrastructure led solutions would also require significant earthworks and cause major construction related traffic and disruption. By contrast, the temporary closure of Church Road would only result in displacement of traffic for three weeks of the year and the alternative cycling and walking routes would only result in a negligible increase in journey times."
The AELTC has also submitted a new Buro Happold report detailing its preferred de-silting strategy for Wimbledon Park Lake - the centre piece of Capability Brown's design for the 18th century estate.
It says its de-silting plan would improve the lake's water depth and quality, increasing its recreational value for fishing, sailing and other activities. It plans to remove 50,000m3 of silt from the lake by using an amphibious dredger, which will follow trials of the proposed method. 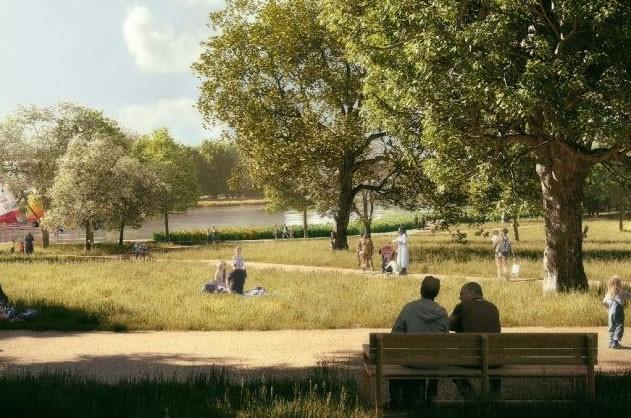 New visualisation of the planned Circular Lake Path in the updated application. Picture: AELTC
But earlier this year the Friends of Wimbledon Park said de-silting will cause significant short-term harm to wildlife and lakeside habitats, the group claimed. It claimed it would also require the arrival of 330 HGV lorries a month for two years.
Criticism of plans to fell 296 trees which are subject to Tree Preservation Orders has seen the AELTC reveal it has talked to Merton's Tree Officer and another new report states changes to planned path alignments, court positioning, bridges and swales which is says will lessen impacts on trees. The original list of tree removals has not, however, been amended.
Tweaks to design changes to proposed buildings are also included in the updated application, involving what the AELTC calls a "significant" reduction of use of concrete to provide an "improvement" to the visual amenity of the development.
Local Liberal Democrats have been among those claiming that a restrictive covenant – a clause in a contract – could halt the building on the Grade II* listed parkland even if planning permission was granted.
A Twitter account set up by Wimbledon and Southfields Residents' Associations, called @youcannotbeserioussw19 has highlighted the threat to local wildlife by the scheme.