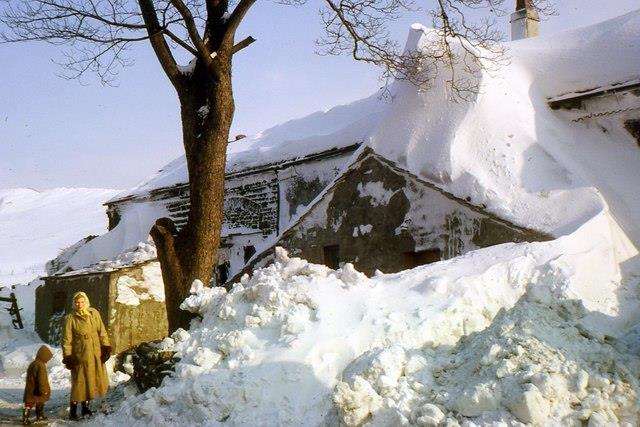 Deep snow near Burrow-with-Burrow, Lancashire, England, January 1963
On 29 and 30 December 1962 a blizzard swept across South West England and Wales. Snow drifted to more than 20 feet (6.1 m) deep in places, driven by gale force easterly winds, blocking roads and railways. The snow stranded villagers     and brought down power lines. The near-freezing temperatures meant that the snow cover lasted for more than two months in some areas. Snow was 6 inches (0.15 m) .In January 1963, the sea froze for one mile from shore at Herne Bay, Kent. The sea froze inshore in many places. The upper reaches of the River Thames froze over.
Snow continued to fall in February 1963, which was stormy with winds reaching Force 8 on the Beaufort scale (gale-force winds).
A 36-hour blizzard caused heavy drifting snow in most parts of the country. Drifts reached 20 feet (6.1 m) in some areas and gale-force winds reached up to 81 miles per hour (130 km/h). On the Isle of Man, wind speeds were recorded at 119 miles per hour (192 km/h).
6 March was the first morning of the year without frost in Britain. Temperatures rose to 17 °C (62.6 °F) and the remaining snow disappeared.