Salvation in Sight at Last for Hammersmith Bridge

A new proposal to get Hammersmith Bridge reopened “within a year” has been unveiled by Hammersmith and Fulham Council. It would see the 133-year-old crossing converted into a “double-decker” bridge, with a new “raised truss” built above the existing road deck.
The council said this would allow pedestrians and cyclists to use a new lower deck, and cars and buses to drive on the upper deck. “Motor vehicles could be using the bridge, with river traffic passing underneath, within a year of a contractor being appointed,” the council said in a statement.
The plans were presented on 26 November to the Department for Transport, which has been approached for comment. To the frustration of residents, the Government has been locked in a stand-off with the council and Transport for London over who should pay for the bridge’s full restoration, estimated at £141 million. The council said this new proposal could be “completed at a cost lower than the current £141million estimate”, although it did not provide a proposed cost.
The proposals have been worked on in collaboration with Sir John Ritblat, the honorary president of property developer British Land and chairman of Delancey’s real estate advisory board. The latter company acquired the vast Earl’s Court development land in 2019. Architects Foster + Partners and specialist bridge engineers COWI were approached to work on the scheme. Foster + Partners worked on the Millennium Bridge and Canary Wharf underground station, as well as concept designs for a proposed new airport in the Thames Estuary that was nicknamed Boris Island.
Explaining how the project would be carried out, the council said the lower bridge deck would be built first, which would “provide support for the bridge as well as a safe platform for restoration work to be carried out.” It said: “There would be no load added to the existing bridge deck, which would be removed in stages for repair. Contractors would use the new lower pedestrian deck to access the works. When completed, the temporary raised deck would be removed. “Elements of the Grade II*-listed bridge that need repair, including pedestals, anchors and chains, would be lifted away using the temporary bridge and transported by barges to an off-site facility for safe repair and restoration. “By repairing the bridge off-site, the huge task of restoration can be done at greater speed, to a higher level and at significantly reduced cost. It would also minimise noise, environmental impact and on-site activity, as well as reducing the all-important carbon footprint of the works.”
Council leader Stephen Cowan said: “I am extremely grateful to Sir John Ritblat for responding to our call for help so comprehensively. The Foster + Partners and the COWI design team have developed an exciting and imaginative initiative which has the very strong possibility of providing a quicker and better value solution than any of the other proposals. “Our engineers have held positive and constructive talks with Foster + Partners and COWI. I am optimistic that we now have a viable option within our grasp that is  a win for all. I commend it to the government in the hope that it will be the catalyst for real progress in funding all the necessary works to the bridge.” 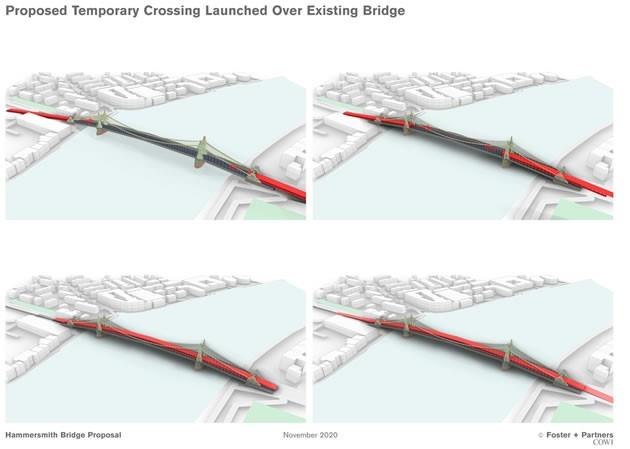 An artist's impression of proposal for Hammersmith Bridge. Picture: Foster + Partners
Luke Fox, senior executive partner at Foster + Partners, said: “We are excited to propose this simple and sustainable solution to this important missing piece of London’s infrastructure.”
David MacKenzie, executive director at COWI, said, “We consider that this approach is practical and viable. Our experience is that off-site refurbishment of bridge structures is safer and more controlled, and results in a higher quality final outcome when the structure is re-installed.”
A government spokesperson said: “As owners of Hammersmith Bridge, the London Borough of Hammersmith and Fulham is responsible for the maintenance, repair and decision-making on its upkeep. A lack of proper maintenance throughout the years has led to this situation, but together we are committed to ensuring Londoners can cross the river again as soon as safely possible.
“We are determined that any Government funding is fair to the UK taxpayer, and this will remain a priority as discussions continue between stakeholders and the Government on longer-term funding for the bridge repairs.
“The Project Director, and DfT engineers look forward to examining the new proposals in detail.”