The Royal Hospital Putney on Track

The Royal Hospital Putney is using pioneering smart technology to track down life-saving equipment.  The hospital in South West London is one of the first in the country to use cutting edge smart technology to help staff devote more time to their patients.  The Royal Hospital for Neuro-disability in Putney is using sensors to track equipment around the hospital to make it easier to find, and monitor the temperatures of fridges and occupancy of rooms automatically.
During the coronavirus pandemic this has been essential for staff under pressure. "The time saving is incredible," said Toby Roberts, the hospital's associate director of information and technology.  "The frustration is when you've got a patient that's in distress and you've got the extra pressure of having to leave the patient and go and find a scanner which may then take you 15 or 20 minutes running around the hospital. "It's not very good, and when you've got a patient in distress it's even less acceptable."
However, the new sensors, which are attached to individual pieces of equipment like ECG machines or bladder scanners, can be easily tracked in the hospital. "You can say to your patient, I know where there is a scanner, I know that it's two floors down and it will take five minutes. "It's that certainty, the increased quality of care and better communication with that patient and their family," said Mr Roberts 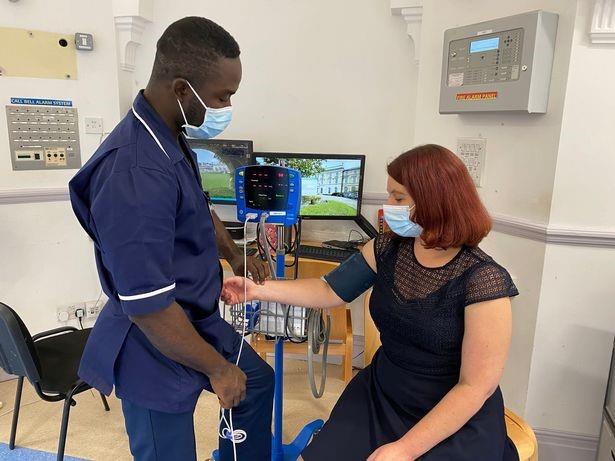 Equipment such as blood pressure monitors are fitted with smart IoT sensors "In an ideal world we'd have an ECG machine on every ward and a bladder scanner on every ward, at least every ward, and we would have lots of money to buy lots of stuff.
"But we don't. ECGs and bladder scanners are quite expensive."
The new Internet of Things (IoT) solution is implemented with BT's wireless network and smart sensors sourced by the start-up firm Microshare. It also helps to perform procedural tasks automatically instead of relying on manual recording to free up staff to focus on their patients, who have complex neurological disabilities caused by damage to the brain or other parts of the nervous system. Sensors are placed in rooms to check if anyone is in them and show which places are not used as often and do not need the air conditioning or heating to be on.
Toby-Roberts, the associate director of information and technology at the Royal Hospital for Neuro-disability in Putney says, " if you get that data you don't know what that means. It's only when it comes back into our secure environment that we're seeing Room 2076 actually means a particular room on one of our wards. "So the data is anonymised at source. Even if the data was compromised it is of no use. "We're not saying that the bladder scanner has moved here. We're saying this anonymous device is giving out this data string. Only when it comes into a secure environment do we assign characteristics to it." He also believes that the technology helps to save money in the long run, crucial for an independent charity-run hospital like the RHN.
"In context of the time saving and the extra data that we get the costs are quite easy to justify. If you think about having three key nurses and a couple of health care assistants running around the hospital for half an hour to find a piece of equipment, even if you just add up their hourly rate, let alone the increase in service quality, it's really quite an easy equation to justify."
In the future he hopes the new technology at the RHN may serve as a reference point in the digital transformation of the NHS. He added: "We're a very small charity compared with NHS Trusts, but even for us and our cash restraints it is a reasonably easy equation to balance in terms of quality outputs, time savings, frustrations with equipment, versus cash spent. "We're ahead of the curve here, one of the advantages of being a small independent charity outside the NHS is that we can move a good deal faster than the NHS in many cases." Mr Roberts believes that there are thousands of more things the hospital would want to track in the future including beds, hositers, and air conditioning units.
He says he has seen a huge transformation during his six years at the hospital and there will be many more changes to come. "The IT was certainly not cutting edge by any means. Over that period we have turned things around from playing catch up in a lot of areas to leading them instead," he added.