Tennis courts and 8,000 seat stadium would be built on Wimbledon Park Golf Club.
A huge new plan to expand Wimbledon Tennis Club would see more of the famous tournament’s qualifying matches played on site.
The famous All England Lawn Tennis Club (AELTC) wants to expand into the neighbouring Wimbledon Park Golf Club.
The club wants to build 39 new grass courts as well as an 8,000 seat ‘parkland show court’.
The AELTC says that building more courts would mean qualifying matches of the tournament could be moved from Roehampton to Wimbledon.
The club bought the leasehold of the golf course back in 2018, it already owned the freehold. It is set to take over the northern part of the course in 2022 and the rest of it in the following year.
The project is set to cover 67 hectares of land between Wimbledon and Wandsworth. 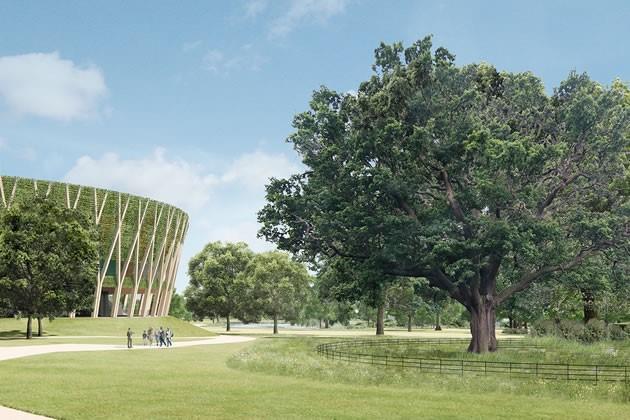 The Parklands Show Court, part of the All England Tennis Club Plan. Picture AELTC
There are currently a total of 40 tennis courts on site and the grand slam tournament held there each year attracts 500,000 visitors. But the club wants to make more room for the event. In the planning application it says the 18 championship courts are packed into the site and stretch along Church Road leading to congestion.
If the plans are given the green light the daily capacity of the event could increase from 42,000 to 50,000 a day.
The plans include creating route around Wimbledon Park Lake and creating an area of deeper water for sports. It would also create a pedestrian link between Wimbledon Park station to Wimbledon Village.
The planning application said: “The AELTC Wimbledon Park Project is a once in a generation opportunity to maintain The Championships as the premier tennis tournament in the world, and deliver a positive impact for our communities, in particular our local community.”
Public consultation on the plans closes on 19 September and if the plans are approved, AELTC hopes the development would be ready for the 2028 tournament.
The plans have been put in to both Merton and Wandsworth councils.