A series of public artworks has been commissioned for Putney Embankment.
Tideway has asked Claire Barclay to create the work for the new public area which will be provided once the super sewer project is completed.
She has developed a series of artworks which comprise: three bronze oars to be incorporated into the foreshore balustrade in the form of lengths of handrail; text incorporated into the inlaid University Boat Race (UBR) marker line in the form of raised cast lettering; and a graphic pattern waterjet cut into the granite walling of the foreshore kiosk. The artworks refer back to Putney’s heritage as the location of the Putney Debates.
Claire is proposing to create a graphic artwork that will be cut into specially prepared granite blocks that will clad part of the south and west walls of the kiosk building. The design will relate to and compliment her other artworks by depicting details of plans of one or more boats associated with the River Thames and referenced by the bronze oars of the balustrade: a Thames lighter barge, a traditional wherry and a Thames skiff. The kiosk artwork is using as its source, authentic plans and illustrations from books, archives at the National Maritime Museum, and local traditional boat builders and enthusiasts.
The kiosk artwork will be positioned on the highly visible kiosk facades at the southwest corner of the Putney Embankment site, facing both to the west, along the Embankment and south towards the road. The image will be viewed at close proximity from the street and wrap around the southwest corner in order to be visible when approaching from Putney Pier. 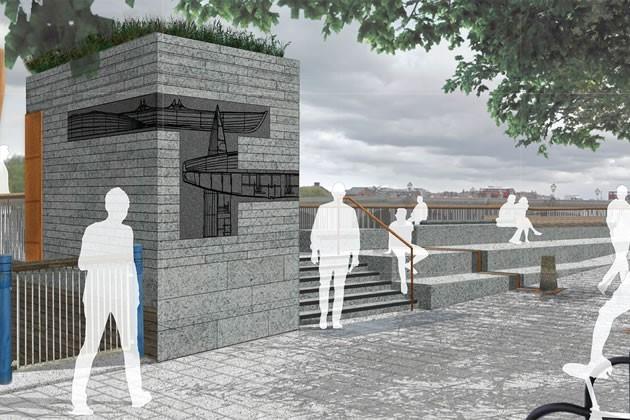 Visitors to the site will be able to naturally grip the cast oars in the same way as the original oars were gripped when used to row, the oars taking on a new function as they are formed into handrails. The flat parts of the oars will also provide alternative leaning points. Details like leather oar collars or wear from rowlocks will ideally be transferred through the casting process, creating a narrative texture within the resulting forms.
Bronze has been chosen for its aesthetic qualities plus this material is durable and will improve over time. Details of wood grain, leather collars and wear and tear on the original oars will be transferred to the cast surfaces. The finish will be Penny Bronze.
The UBR marker strip visually connects the existing UBR marker stone with the marker on the north bank. The texts are located near to the fixed benches on the site and just in front of the balustrade and river wall. 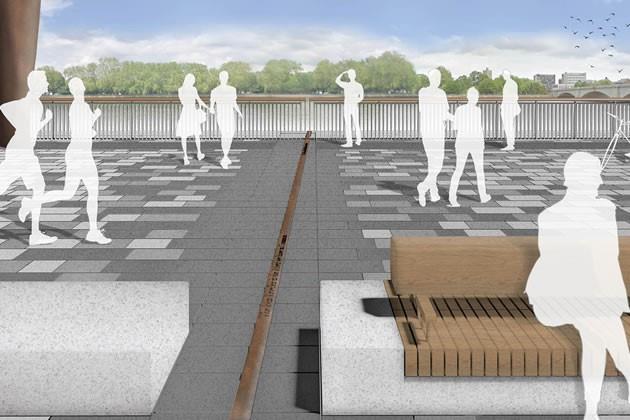 The text for the UBR Marker takes its starting point from the Lightermen’s and Watermen’s motto ‘At commandment of our superiors’. The artist found a film that includes many interviews with Thames Lightermen, with one of them describing his superiors as ‘the wind and the tide’.
The proposed texts are:
1. The Best Leveller is the River we have in Common.
2. The Tide and the Wind Direct our Paths.
The heritage theme is ‘Recreation to Industry: Society in Transition’ and the designs for Putney aim to relate to ways in which cultural context influences popular movements advocating social change.
The artist feels that whilst the site is primarily associated today with elite rowing through the Boat Race, from the 17th century the Putney foreshore was busy with commercial boatmen ferrying people and cargo across the river, predominantly in clinker-built wooden boats called wherries. Putney was also home to a number of boat builders and boat related services.
With the advent of bridges and steamboats, there was a gradual shift from commercial to recreational boat use on this area of the Thames. From 1830 onwards the Putney Embankment became associated with recreational rowing and rowing contests. Putney is positioned on the River Thames at a transitional point where there is a shift from the industrial to the recreational in terms of river use. As a result, the local maritime heritage reflects this diversity and changing activities connected to work and leisure on the foreshore.
Adjacent to the Putney Embankment site is Watermen’s Green and the slipway that will be integrated into the new landscaping. This area was a landing and loading place for river vessels, including Thames sailing barges, in the past. The artist feels it is important to acknowledge that Lightermen and Watermen too share a strong connection to this context – i.e. not just the more advantaged world of the Boat Race, but the River workers, and the people that they carried across the Thames.
The three boats whose oars are proposed originated as working commercial boats that were commonly used to transport people and goods, but have since become used for recreational purposes too.
The largest of the cast oars will be a seven metre long wooden barge ‘sweep’ used for manoeuvring barge boats on the Thames. There is a strong tradition of barge driving, where barges are expertly rowed by Lightermen using only the long sweeps and the wind and tide. A number of barge-driving competitions happen annually on the River and the Barge Driving Trust is one organisation helping to keep the tradition alive. The wherry and skiff are smaller wooden boats traditionally and commonly used for transporting everyday passengers and goods across the river.
The ship chandlers, Chas Newens Marine, is situated on the Putney Embankment at the original site of E. Ayling and Son, a renowned boat builder, well known for their oar and scull making. The company no longer exists but the beautifully crafted oars are still in use on the river.