AFC Wimbledon Club to host Doncaster Rovers at Plough Lane but without fans.
After a break of nearly 30 years a new ground at Plough Lane will restore a Wimbledon Football Club in this historic location. A date has been set for AFC Wimbledon’s first game in its brand new stadium. The Plough Lane stadium is expected to be completed by the end of October with the first match planned for November 3 against Doncaster Rovers. But coronavirus restrictions mean that fans won’t be present for the long-awaited return home.
Wimbledon FC, as the club was known then, left Plough Lane in 1991, first sharing Selhurst Park with Crystal Palace FC, before moving to Milton Keynes where they were renamed Milton Keynes Dons. AFC Wimbledon was formed in 2002 by dedicated Wimbledon fans who were not happy about the move to Milton Keynes.
Club chief executive, Joe Palmer, said: “If all goes to plan, the Doncaster game will mark a real milestone. Not only will we be opening the doors on our brand-new home, we will also be witnessing the start of a brand-new era for our club”.
The stadium will not be fully completed until early December when rail seating will be installed. At this stage the stadium will have a capacity of 9,000 with hopes to eventually increase to 20,000. In the coming months a five-a-side pitch is set to be installed in the north-west corner of the site. 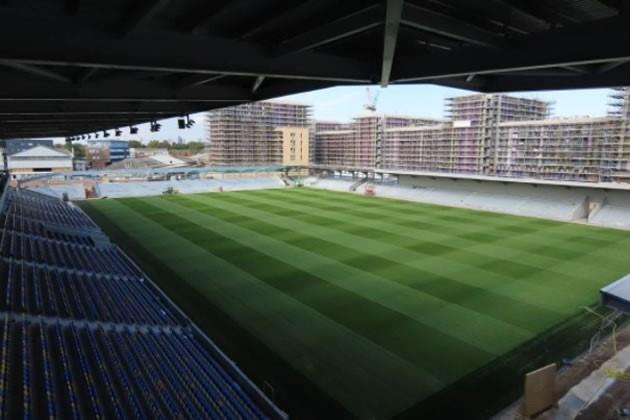 Pictures: AFC Wimbledon
The new development also has an on-site pub and club shop which the club is hoping to open as soon as possible. The Plough Lane development also includes 600 new homes with the first 114 expected to be completed in 2021.