A Blue Plaque at the former home of Professor Abdus Salam has been unveiled in Putney.
English Heritage have installed the plaque on a house on Campion Road where Professor Salam’s lived from 1957 until his death in 1996. This coincided with his time at Imperial College, during which he set up the Theoretical Physics Department with the late Professor Paul T Matthews.
The plaque, which reads: Abdus Salam 1926-1996. Physicist, Nobel Laureate and champion of science in developing countries lived here. The Blue Plaque for Abdus SalamProfessor Salam was born in 1926 in what is now Pakistan, and came to the UK in 1946 to study for his PhD at Cambridge. In 1957, he was appointed Professor of Applied Mathematics at Imperial. His work concerned quantum electrodynamics and quantum field theory, and he contributed to the formulation of the ‘Standard Model’ of particle physics.
He was awarded the Nobel Prize for Physics in 1979, alongside Sheldon Glashow and Steven Weinberg, for his contribution to the electroweak unification theory. He was also a promoter of science education in the developing world, founding the International Centre for Theoretical Physics (ICTP) in Trieste, Italy, in 1964, where scientists from developing countries would be able to come on a regular basis to interact with leaders in the field.
Professor Michael Duff, from the Department of Physics at Imperial, completed his PhD in 1972 under the supervision of Professor Salam, and formerly held the title of Abdus Salam Professor of Theoretical Physics.
He said, “A blue plaque on the house in Putney where he lived for 40 years is a fitting tribute to Nobel Laureate Abdus Salam, who was not only one of the finest scientists of the twentieth century, having unified two of the four fundamental forces of nature, but who also dedicated his life to the betterment of science and education in the developing world.” 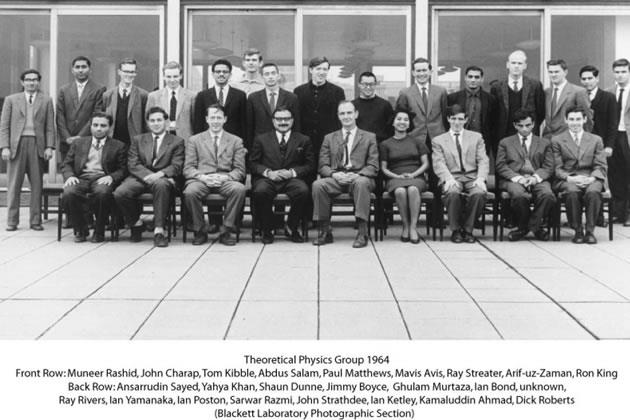 The Theoretical Physics group in 1964, with Salam at the front
Imperial’s Provost, Professor Ian Walmsley, was also taught by Professor Salam while a student at Imperial in the 1970s. He said, “Abdus Salam’s contributions to physics were profound, and his commitment to science deep, as exemplified by his founding of the International Centre for Theoretical Physics in Trieste, which has the aim of building science capability and capacity in the developing world.”
Abdus Salam’s son, Ahmad Salam, said: “The fact that most of the plaque is taken up with the words ‘champion of science in developing countries’ would have made my father very happy. For him, above all else, that was the legacy he wanted to impart.
“To be honoured in this way would have been truly humbling to a man who believed ‘scientific thought and its creation is the common and shared heritage of mankind.’ This was a belief fully supported by the ideals, freedoms and values he found here in England. He loved the intellectual freedom, the religious freedom and the respect for people of education.”
Images published with kind permission of Imperial College