Giant tunnelling machine now has to cross the river to Fulham 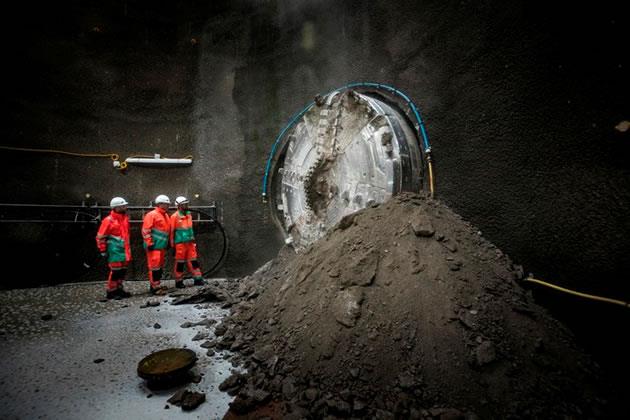 Charlotte makes her way under Wandsworth
The Frogmore sewage connection tunnel which connects sewage overflow from Kings George’s Park to Dormay Street in Wandsworth is now complete.
A huge tunnelling machine nicknamed ‘Charlotte’, after local suffragist Charlotte Despard, will now be lifted from the shaft, taken back to Dormay Street and placed back into the ground to tunnel 600 metres north to Fulham.
On the other side of the river another tunnelling machine ‘Rachel’ recently arrived in the vicinity of Putney Bridge. Since August three barges have removed spoil from Putney site. Each barge is the equivalent50 HGV lorries not traveling on local roads. A total of 17 barges have been used since the project started.
The Frogmore connection tunnel will form part of the Thames Tideway Tunnel project which is building 25km of tunnels under London that will prevent the tens of millions of tonnes of pollution that are currently entering the Thames every year.
Thames Tideway said, “It may be hard to believe, but until the tunnel is built, we’re treating the river like a toilet. Raw sewage flows directly into the Thames when it rains, as this is the only way to stop homes and streets from flooding when the existing Victorian sewers overflow.”
Locally the 1.1km Frogmore tunnel will take sewage overflows from King George’s Park into the main 25km super sewer at Fulham, where it will be transferred to east London for treatment instead of polluting the Thames.
Sally Cox, Project Director for the west section of the project, said: “This breakthrough, the first on the Tideway project, marks another key step toward a cleaner, healthier River Thames.
“Despite being the smallest TBM on the Tideway project, Charlotte is creating vital infrastructure that will benefit Londoners and their river for many years to come.
Charlotte is a three-metre-wide machine and more than 70 metres long. The Frogmore Connection Tunnel is being created at a depth of around 30 metres.
The crucial expansion of London’s sewer network is due for completion in 2024