Clapham Junction one of the busiest stations in the UK, with more trains stopping there per hour than any other station in Europe.
But there have long been problems with congestion and the station’s design.
Because it is so large and has so many platforms, it effectively divides Battersea in half, and leaves more deprived communities north of the tracks quite isolated from the rest of the town. 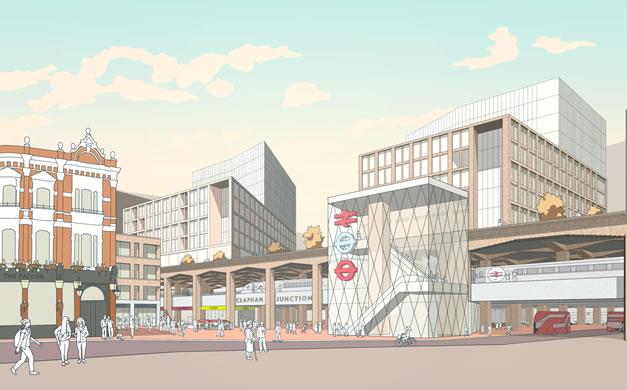 But there are a couple of plans underway to help improve this. In March 2018 Network Rail took over management of the station from South Western Railway, in preparation for redevelopment.
In the short-term this will see the Department for Transport working with Network Rail on the Clapham Junction Congestion Relief Scheme.
This will develop a range of improvements at the station to reduce the levels of congestion experienced by passengers, however the specifics of what is being planned for Clapham Junction have yet to be released.
In November 2018, Network Rail outlined £2 billion worth of works on the Wessex rail network, which included works to improve the platforms at Clapham Junction Station.
In the long-term, it is understood that a redevelopment scheme for the whole station is being considered, alongside new shops and housing.
Network Rail is said to be finalising a draft Strategic Outline Business Case for the scheme.
It is expected to be submitted to the Department for Transport this summer.
If Crossrail 2 gets the go ahead, Clapham Junction would provide another interchange, with tunnels underneath the existing station.
This would require a major rethink of the current station plan, but could help to reduce crowding on services into central London through an alternative interchange opportunity.
The current Crossrail 2 proposals at Clapham Junction include a new station entrance and ticket hall on to Grant Road and an enhanced station entrance on to St John’s Hill.
These improvements would be coordinated with Network Rail’s own improvement works, together with Wandsworth Council’s proposals to develop the Winstanley Estate, which are due to be delivered in advance of Crossrail 2.